In terms of covid-19 IFRs, an important difference exists between places with and without a partial or total collapse of local health and elderly care, and between the early and late pandemic phase.

A. Places without a collapse of health and elderly care

B. Places with a partial or total collapse of health and elderly care

Places with a partial or total collapse of local health and eldery care experienced significantly higher and very strongly age-dependent IFR values, especially during the early phase of the pandemic.

However, IgG antibody tests may underestimate the true prevalence of coronavirus infections and may thus overestimate the IFR to some extent (see section 2 below).

A Spanish seroprevalence study found an overall IFR between 0.82% (based on confirmed Covid-19 deaths) and 1.07% (based on excess all-cause deaths). The study didn’t include nursing homes, which accounted for about 50% of all deaths. The IFR was strongly age-dependent, with values below 0.03% until 40 and below 0.1% until 50 but reaching very high levels above 70 years.

The study found a country-wide IgG antibody seroprevalence of just 4.9% (about 12% in Madrid). However, less than 20% of symptomatic people (3+ symptoms or anosmia) had IgG antibodies. This may indicate that infections were up to five times more widespread than detected by IgG antibody tests (see section 2 below on this topic). If so, Spanish IFR values might drop below 0.5%.

Above 60 years, there was a significant difference in lethality between men and women. This might be due to e.g. genetic reasons, cardiovascular health, or certain habits like smoking.

An Italian study considered contacts of confirmed Covid-19 cases in the Lombardy region, which includes hotspots like Bergamo and Cremona, to determine their fatality risk and their comorbidities. They found that the overall IFR was 62% lower in the second phase of the pandemic (after March 16) compared to the first, cataclysmic phase (up to March 15).

This was particularly evident in people above 80, where the IFR dropped from 30% in the early phase to 8% in the later phase (4% for women, 16% for men). Below 50 years, IFRs were near 0%; below 70 years, IFRs were 0.43% (both phases combined). More than 80% of deaths occurred in patients with cardiovascular disease, which ist known to be a major risk factor.

Of note, among Italian people with anosmia (temporary loss of the sense of smell or taste), a very typical Covid symptom, only about 25% were found to have IgG antibodies. This could indicate that coronavirus infections are more widespread, and IFRs lower, than assumed.

About 52% of Covid deaths in NYC occurred in the 75+ age group. This value is lower than in Europe, where about 90% of deaths were 70+. In all of New York State, about 6,300 patients were sent from hospitals into nursing homes, which ultimately registered between 6,600 and 13,000 deaths.

As in Italy and other hard-hit places, the IFR for age groups above 65 dropped by about 50% during the course of the pandemic, possibly due to better medical preparedness and treatment strategies.

Until July 2020, England counted about 30,000 Covid deaths in the general population and about 20,000 Covid-related deaths in nursing homes (which had to receive patients). According to the Oxford Centre for Evidence-Based Medicine, the Covid IFR fell by 50% to 80% during the epidemic and reached a value between 0.3% and 0.5% by the end of July.

Belgium reported one of the highest covid death rates in Europe, in part because it always included confirmed and probable covid deaths. 50% of excess deaths in Belgium occurred in nursing homes. Of these, only about a third were confirmed by a PCR test. It is possible that some of the non-confirmed nursing home deaths were not due to covid, but due to the extreme circumstances.

Even without age-adjustment, the peak monthly mortality due to Covid in April 2020 was equal to the 1989 seasonal flu wave and lower than the 1951, 1960 and 1970 flu waves (see chart below). The median age of covid deaths in Belgium was about 86 years. However, Belgian antibody seroprevalence until June was only about 7% at the national level and 12% in Brussels.

Immunological research indicates that serological antibody studies, which measure antibodies in the blood (mostly IgG), may detect only about 50% to 80% of all coronavirus infections, depending on the sensitivity of the assay, the timing of the test, and the population tested.

This is because up to 80% of people develop only mild symptoms or no symptoms if infected, as they neutralize the coronavirus with their mucosal (IgA) or cellular (T-cells) immune system. These people may develop no measurable IgG antibodies or may show them only for a few weeks.

Covid hotspots like Bergamo, Madrid and Stockholm observed a slowdown in infections once an antibody seroprevalence of about 30% had been reached. Among people with anosmia – i.e. temporary loss of the sense of taste or smell, a very typical covid-19 symptom – only about 20% to 50% had detectable IgG antibodies, according to surveys in several countries (see below).

1) Only 16% of likely infected HCW had IgG; 2) People with anosmia but without IgG antibodies.

Half of all deaths were below, half were above the median age.

In hotspots like New York City, the overall hospitalization rate based on antibody studies was about 2.5% (19.9% or 1.7 million people with antibodies and 43,000 hospitalizations by May 2).

The lower than expected hospitalization rate may explain why most Covid-19 ‘field hospitals’, even in hard-hit countries like the US, the UK and China, remained largely empty. Nevertheless, local covid infection surges often put a very high strain on hospital systems and ICUs. 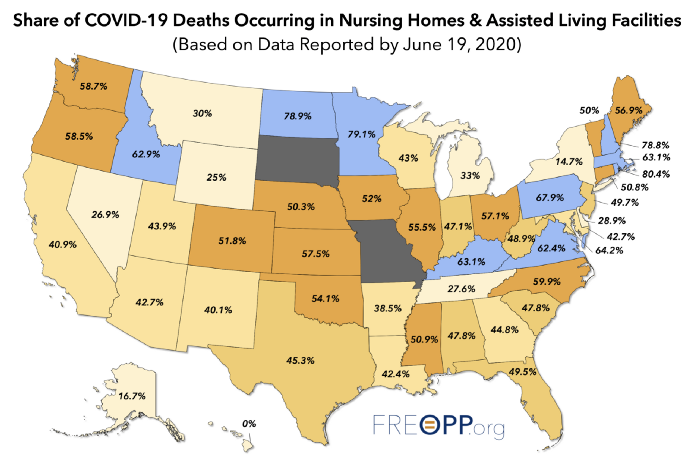 When calculating and communicating IFRs, it is therefore important to distinguish between nursing homes (which require focused and humane protection) and the general population.

A comparison between the number of coronavirus deaths predicted by the influential model of Imperial College London (no measures or moderate measures) and the actual number of deaths in Sweden indicates that the model significantly overestimated the impact of the epidemic:

Percentage of people with measurable antibodies to the new coronavirus.