This week, the latest US national antibody data covering the period from September 7 to September 24 has been published. With the exception of a few northeastern states (notably New York), most US states still had an antibody seroprevalence of below 10% or even below 5% (see charts below).

These are very low antibody levels. Until early October, the US counted about 300,000 excess deaths, of which about 200,000 deaths were associated with covid, according to the CDC. Of these, about 82,000 or 41% occurred in care homes, according to the LTC covid-19 network.

It is clear that covid in the US is a particularly serious disease, most likely due to the high levels of pre-existing metabolic conditions (i.e. diabetes, obesity and cardiovascular disease).

Until a safe and effective vaccine becomes available, the most important measure for high-risk people is early outpatient or even prophylactic treatment based on the protocol developed by the US Frontline Covid-19 Critical Care Alliance. Patients should contact their doctor.

In age-adjusted terms, overall US covid mortality will end up somewhere between the medium to strong flu pandemics of the 20th century. On the plus side, intubation and in-hospital mortality rates are markedly lower today than they were in spring, when many covid patients were directly and unnecessarily put on ventilators.

In Sweden, antibody seroprevalence in Stockholm has reached 31.6% by mid-November (up from 15% in October), which is by far the highest level of any Western capital (NYC reached about 25% by early summer), and is expected to significantly slow the local epidemic. However, other parts of Sweden may have reached only about 10 to 15%. Overall, Swedish mortality remains comparable to previous strong seasonal flu waves.

As previously mentioned, the actual prevalence of covid immunity may be somewhat higher than antibody values indicate, as commercial antibody tests may miss people who had an asymptomatic or mild covid infection. For instance, a highly sensitive antibody test developed by Northwestern University found a 20% seroprevalence in Chicago, instead of the previously assumed 5% to 10%.

US antibody data by state and age group (July to September) 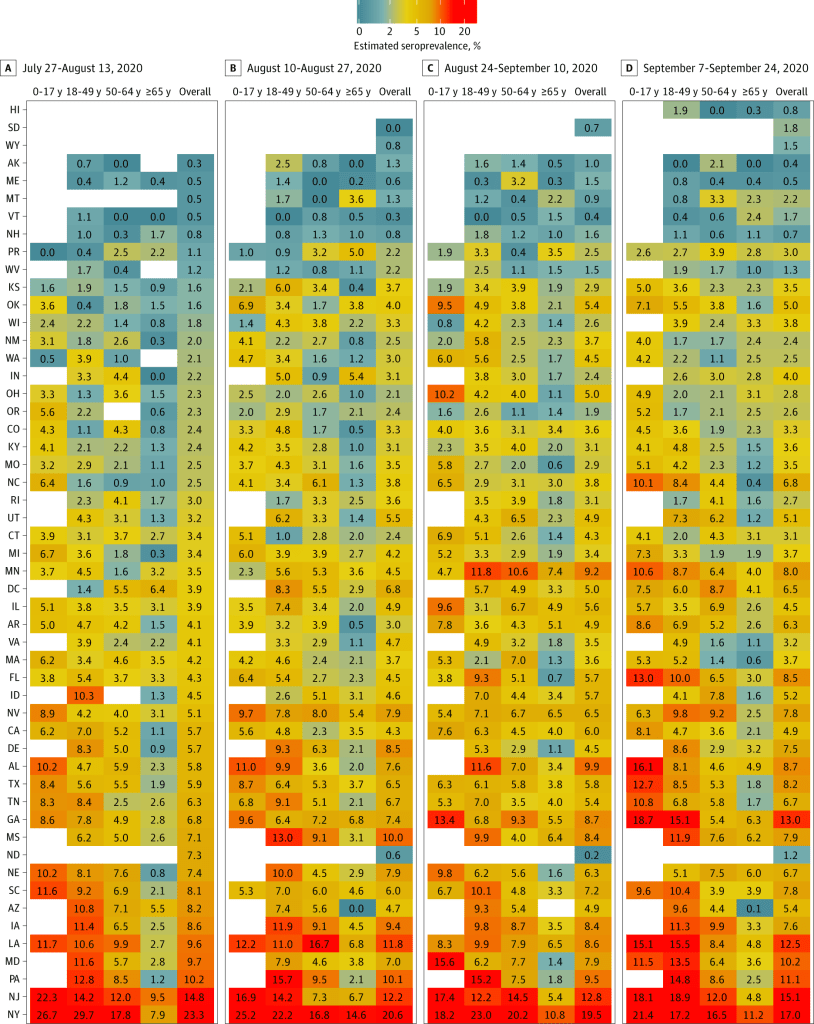 Source: Estimated SARS-CoV-2 Seroprevalence in the US as of September 2020 (JAMA)