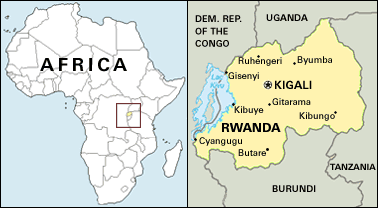 25 years ago, a genocide occurred in Rwanda. But what did really happen back then?

According to official accounts, the Hutu shot down their own president’s plane, murdered hundreds of thousands of people – including many Hutu – and were finally stopped by the RPF’s Tutsi troops under Paul Kagame, who has ruled as a democratic President ever since. US President Bill Clinton later apologized for the USA’s non-intervention and honored Kagame as an outstanding statesman.

According to other accounts, the US-supported RPF militia shot down the Rwandan President’s plane (a so-called decapitation strike), then marched in from neighbouring Uganda, murdering hundreds of thousands of people and driving out almost two million; Kagame has since ruled quasi-dictatorially in the interest of the US, with whose backing he invaded the resource-rich Congo in 1996, triggering the Congo war that lasted over seven years and caused a further 5 million deaths.

For those interested in the first version, watch the feature film Hotel Rwanda (2004) – one of the most inspiring films of all time according to the American Film Institute – or consult the award-winning Wikipedia article on the topic (for more about the role of Wikipedia, see here).

For those interested in the second version, see the BBC documentary Rwanda’s Untold Story (2014), as well as the interview by German journalist Billy Six with Canadian Christopher Black (2017), the defense attorney at the International Criminal Tribunal for Rwanda and the former Yugoslavia.

»What the world believes, and what actually happened, are quite different.«
Professor Allan C. Stam in Rwanda’s Untold Story