How can US foreign policy be explained in a systematic and rational way? The following chart – based on a model developed by political science professors David Sylvan and Stephen Majeski – reveals the longstanding imperial logic behind US diplomatic and military interventions around the globe. 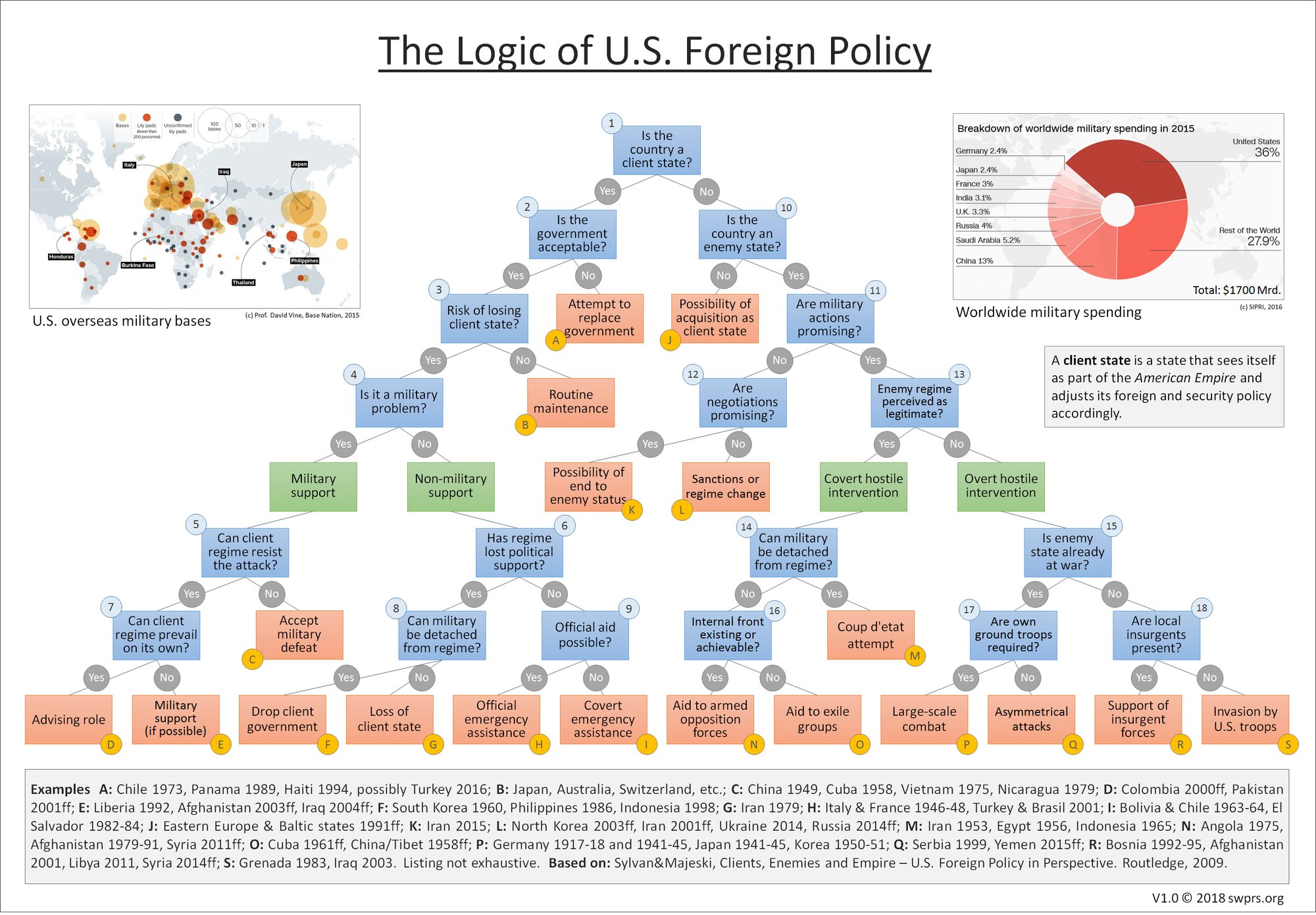 Due to its economic and military supremacy, the Unites States has been assuming the role of a modern empire since the Second World War and especially since 1990. This status implies a very specific, and a genuinely imperial, logic of action for its foreign policy (see figure above).

The central distinction (#1 in the figure above) from the perspective of an empire is that between client and non-client states. The concept of the client state dates back to the time of the Roman Empire and denotes states that are basically self-governing but nevertheless align their foreign and security policy and their succession of government with the empire.

In the case of existing client states (left side of the diagram), the empire has to decide between routine administration (B – e.g. Switzerland and Austria), military or non-military (e.g. economic) support (D to I – e.g. Colombia and Pakistan), or an attempt to replace unacceptable client governments demo­cra­tically or militarily (A – e.g. Greece 1967, Chile 1973). In certain cases, a client government can no longer hold on to power despite imperial support and must be dropped or the client state has to be abandoned altogether (C, F, G – e.g. South Vietnam 1975 or Iran 1979).

In the case of non-client states (right side of diagram), the situation is quite different. If a region newly comes into the empire’s sphere of influence, the empire will first attempt to acquire its members peacefully as client states (J). This was the case, e.g., in Eastern Europe and the Baltic States after 1990. 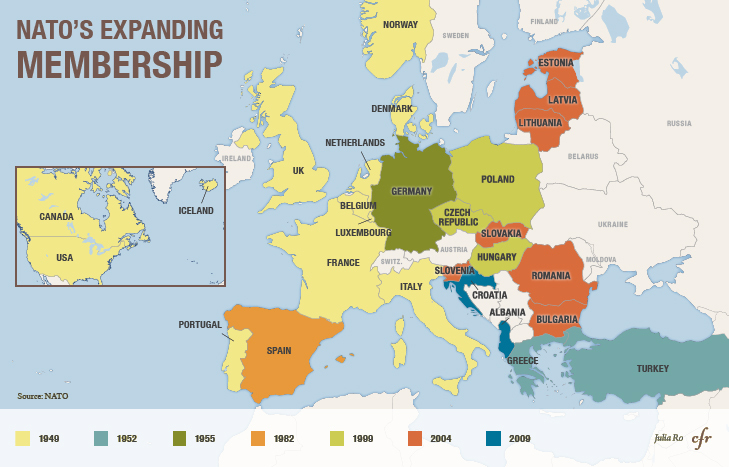 The eastern expansion of NATO (CFR/NATO)

If, on the other hand, a state refuses to become a client state, it sooner or later becomes an enemy state. This is because, solely through its independence and autonomy, it calls into question the empire’s claim to hegemony and thus is threatening its internal and external stability, as an empire that can no longer assert its hegemony will fall apart. In this way, most empires slide into an almost unavoidable compulsion to expand, which in the end will affect even fundamentally peaceful states.

In case of enemy states, the empire must first decide whether military action is promising or not (#11). If not, the empire will possibly start negotiations and, depending on the chances of success, either end the enemy status (K) or impose sanctions or strive for a (civilian) regime change (L).

Typical examples of this situation are currently Iran, North Korea, Russia and increasingly China. It is no coincidence that most of these states possess or are striving for nuclear weapons, because only in this way can the decisive switch #11 be shifted permanently from military to non-military scenarios. Another important factor is the availability of essential raw materials such as oil and gas, as without them it will not be possible to maintain independence in the long term.

The primary concern with raw materials, therefore, is not that the empire wants to own them directly – after all, even enemy states such as the former USSR, modern Russia, Iran, Libya or Venezuela have always sold their raw materials to the West – but that raw materials give enemy states inde­pen­dence and influence, which in itself constitutes a threat from an imperial and hegemonic perspective.

If, on the other hand, the empire judges a military action as promising, the next question is whether or not the enemy state or its government has international legitimacy (#13). If yes, a covert hostile intervention has to be prepared, if no, an overt hostile intervention is possible. In many cases, their autocratic form of government can be used to deny enemy states international legitimacy. 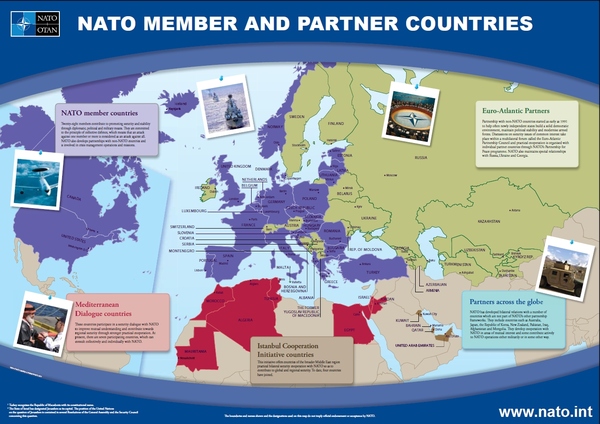 Libya and Syria/Lebanon were the last Mediterranean countries that were not members of NATO’s Mediterranean Partnership (red) and instead wanted to pursue their own regional policy. (NATO)

The imperial logic is fundamentally independent of the respective US government. However, different governments may come to different conclusions regarding the prospects of success of military action (#11) and diplomatic negotiations (#12), the advantages of overt versus covert operations (#13), the acceptance of existing client regimes (#2), and domestic political support for military intervention (E).

The logic described above also implies the key geopolitical functions of imperially oriented media, viz. the delegitimization of enemy states or their governments (#13), the support of overt and the con­ceal­ment of covert hostile operations (#14 to #18), the justification of sanctions and regime changes (L), as well as assisting imperial leadership (B) and the deposition of unwanted client regimes (A).

It is important to note, however, that the rapidly growing range of independent media outlets available on the Internet makes a coherent media portrayal of imperial interventions increasingly difficult. This is a rather new development whose effects on imperial policy are not yet fully predictable.

The Logic of US Foreign Policy by Sylvan and Majeski offers a consistent explanation for American interventions of the past several decades. The usual explanations – by proponents as well as opponents of these wars – are, however, mostly to be seen as pretexts, rationalizations or at best partial aspects, as the following overview shows.

»We’ve got about five or ten years to clean up those old Soviet client regimes
– Syria, Iran, Iraq – before the next great superpower comes on to challenge us.«
Pentagon policy chief Paul Wolfowitz to General Wesley Clark in 1991 (FORA)

Haass, Richard (2017): A World in Disarray: American Foreign Policy and the Crisis of the Old Order. Penguin Press, London.