The following article offers an overview and references regarding the topic of organized pedocriminality in the context of geopolitics, elite management, and the Western media system.

Note: No active reading recommendation; only intended for people who (want to) deal with this topic anyway. Not suitable for minors and sensitive persons.

As the following overview shows, various court trials and victim testimonies, but also sabotaged investigations and murdered witnesses, point to a potentially influential role of pedocriminal power-political elite networks in Europe and the USA.

In the case of Italy, for example, it has been documented that the former Italian military secret service SIFAR compiled over 150,000 dossiers on “irregular behaviour” on behalf of the CIA, which enabled it to blackmail and control Italy’s social and political elite for decades.

With the exception of a few cases (see below), established Western media hardly report on this topic in a timely and investigative manner. It should be borne in mind, however, that these media are usually embedded in the very same geopolitical power structures as the suspects themselves.

For instance, a suspect identified by several Belgian witnesses was Vice-President of the European Commission and Chairman and later Honorary President of the prestigious Bilderberg Conference, to which Western elites in politics, business, the military and the media are invited.

Another suspect identified by Belgian witnesses prevented the investigation of terrorist attacks as Belgian Minister of Justice and in 1992 ordered the early release of pedocriminal Marc Dutroux; later the man became judge and Advocate General at the European Court of Justice.

A later NATO Secretary General was also identified as a participant by a Belgian witness. These and many other high-level personalities have never been prosecuted.

In many cases, children’s homes or child welfare organisations have directly or indirectly been involved in pedocriminal networks; in other cases, the children were recruited from problem families or procured by kidnapping. Some of these children were ultimately murdered.

While from a societal point of view, people of integrity are desirable as elites, from a power-political point of view, on the contrary, corruptible and blackmailable persons are in demand. This results in a fundamental contradiction with far-reaching consequences.

One of the best known cases of organized pedocrime is the Dutroux case of the 1980s and 1990s. This case, however, is not so much about Dutroux himself – who may have acted mainly as a ‘supplier’ – as it is about the fact that both Dutroux and various witnesses described a pedocriminal network that included or still includes significant parts of the Belgian elite and aristocracy. Many of these statements could at least partially be verified. At the same time, around two dozen witnesses involved in the Dutroux trial died under often questionable circumstances. Due to their numerous connections, the Dutroux case and the Belgian witness files undoubtedly have a pan-European significance.

The Belgian Anneke Lucas, who now lives in New York, went public in 2016 and reported that she had been abused as a six to twelve-year-old girl in European elite pedocriminal networks in the 1970s. As the main figure of the network she identified one of the richest and most powerful man in the world at the time, who died in 2017. Her statements are detailed and generally plausible, but in contrast to the statements of the Dutroux witnesses, they have not been recorded or verified by the police and should be treated with appropriate caution.

In the UK, from 2012 onwards, numerous revelations exposed the existence of an extensive pedocriminal network that had been operating for decades and included and possibly still includes significant sections of the British elite, with links to the British royal family, several governments, parliament, the judiciary, police, intelligence services and the media. Among the most significant cases are the Westminster dossier, the Kincora scandal, and former BBC star presenter Jimmy Savile, who had contacts in the highest circles and abused several hundred children.

BBC star presenter Jimmy Savile was knighted by the Queen of England in 1990 for his “social commitment”. In the same year he was awarded the Papal Order of St. Gregory for his services to the Roman Catholic Church. Savile had personal contacts with several British prime ministers, including Thatcher and Blair.

Picture gallery of some the VIP contacts of Jimmy Savile

In the United States, several elite pedocriminal networks have already been uncovered:

B. Reports on intelligence links:

On the eve of Epstein’s death, some two thousand pages of court files from a trial from 2015 to 2017 were unsealed. They contain statements by Epstein victim Virginia Giuffre about powerful people who abused her. Most media have not or only partially reported on this list. In 2020 a judge ordered the “destruction” of the file.

D. Reports on links with media and science:

Jeffrey Epstein and some of his influential contacts

In Portugal, the Casa Pia scandal, one of the largest European cases of organised pedocrime, became public in 2002. For decades, children from the Lisbon orphanage Casa Pia were taken to and abused by an elite network of politicians, business people, military and media stars. The court case was dragged out for years, and many of the suspects were ultimately not charged. Another well-known case with a possible pedocriminal background is that of the British girl Maddie McCann, who has been missing in Portugal since her disappearance in 2007.

Already from the Dutroux complex (see above) various traces led to Germany. The Belgian Anneke Lucas also claims to have been “given to” several German politicians in the 1970s. Further links to pedocriminality exist in the so-called “NSU complex”, the so-called “Saxony Swamp”, as well as in the historical environment of the Green Party. Another area with geopolitical blackmail potential is the often opaque GDR/MfS past of some of Germany’s leading politicians.

The so-called NSU group allegedly was involved in a series of murders in the Turkish-Kurdish milieu between 2000 to 2006, but there is no direct evidence for this. The alleged suicide of the two protagonists also seems unlikely based on known forensics. On the other hand, there are certain indications that the NSU group may have been connected to a pedocriminal network.

The statements of the Belgian Anneke Lucas have not been recorded or verified by the police and should therefore be treated with particular caution.

Two documentaries (18+) on ritual abuse and the murder of children.

ARD television films from 2012 and 2016 on child trafficking and child abuse in Germany. The films are based on true events.

In Austria, there are both older cases, in which children’s homes cooperated with pedocriminals for decades, and modern abduction cases, such as the case of Natascha Kampusch in particular. Although this case has been presented by the official authorities as an isolated individual case, independent investigations point to an elite pedocriminal network, which could explain the mysterious deaths in the Kampusch investigations: both the kidnapper and the chief investigator were killed.

Documentaries on the Kampusch case

According to individual testimonies, there were connections to Switzerland from both Belgian and French child molester networks, but these were never investigated. The Belgian Anneke Lucas (see above) also claims to have been transferred via Switzerland as a child and abused there. For some years now, the association Care About Ritual Abuse (CARA) has been documenting statements made by victims of ritual sexual violence in Switzerland.

Starting in 2017, it became known that investigations against a pedocriminal Zurich court president were sabotaged in the 1980s and 1990s. According to witnesses, the heads of Zurich’s judiciary, public prosecutor’s office, police and politicians were involved in ignoring or covering up the case. Several of those involved were later even promoted, including to the top of the Zurich Education Directorate and the Criminal Investigation Department.

Another confirmed case of elite pedocriminality in Switzerland is the so-called “Basel Zodiac”, which came to light in 1998. The “Zodiac” was a paedocriminal ring of, among others, academics, lawyers, doctors and businessmen from “the better circles of Basel”, who gave themselves animal names as a cover and abused male prostitutes and under-age boys at sadistic “sex parties” since the 1960s.

International connections to Spain and Thailand were proven, and those to the Belgian Dutroux network were suspected. The background of the Zodiac was never completely uncovered, no charges were brought (among other things because of the statute of limitations) and the case disappeared completely from the media after the summer of 1998.

In recent times, there have been various speculations on the Internet about connections to Swiss federal politics and the P-26 secret army, but no evidence has been found to date.

In 2018, Thomas Walther, the long-standing head of the Coordination Unit for Combating Internet Crime (Kobik) of the Federal Office of Police (Fedpol), went public as a whistleblower. Walther argued that the work of the Kobik, including in the area of child pornography, had been officially obstructed. The Fedpol reacted with a house search and several charges against him, which were all dismissed.

Other cases (without direct connection to elite pedocriminality)

In Switzerland, the practice of so-called “Verdingung” of children existed since the 19th century and until about 1980: “Verdingkinder” were taken away from their biological parents (or given away by them) by the authorities for the purpose of care and education, some of them were auctioned off at “Verdingmärkte”, and accommodated by interested parties who often used them for forced labour on farms and sometimes abused them. Further cases of long-term, systematic sexual abuse are documented in children’s homes and boarding schools. 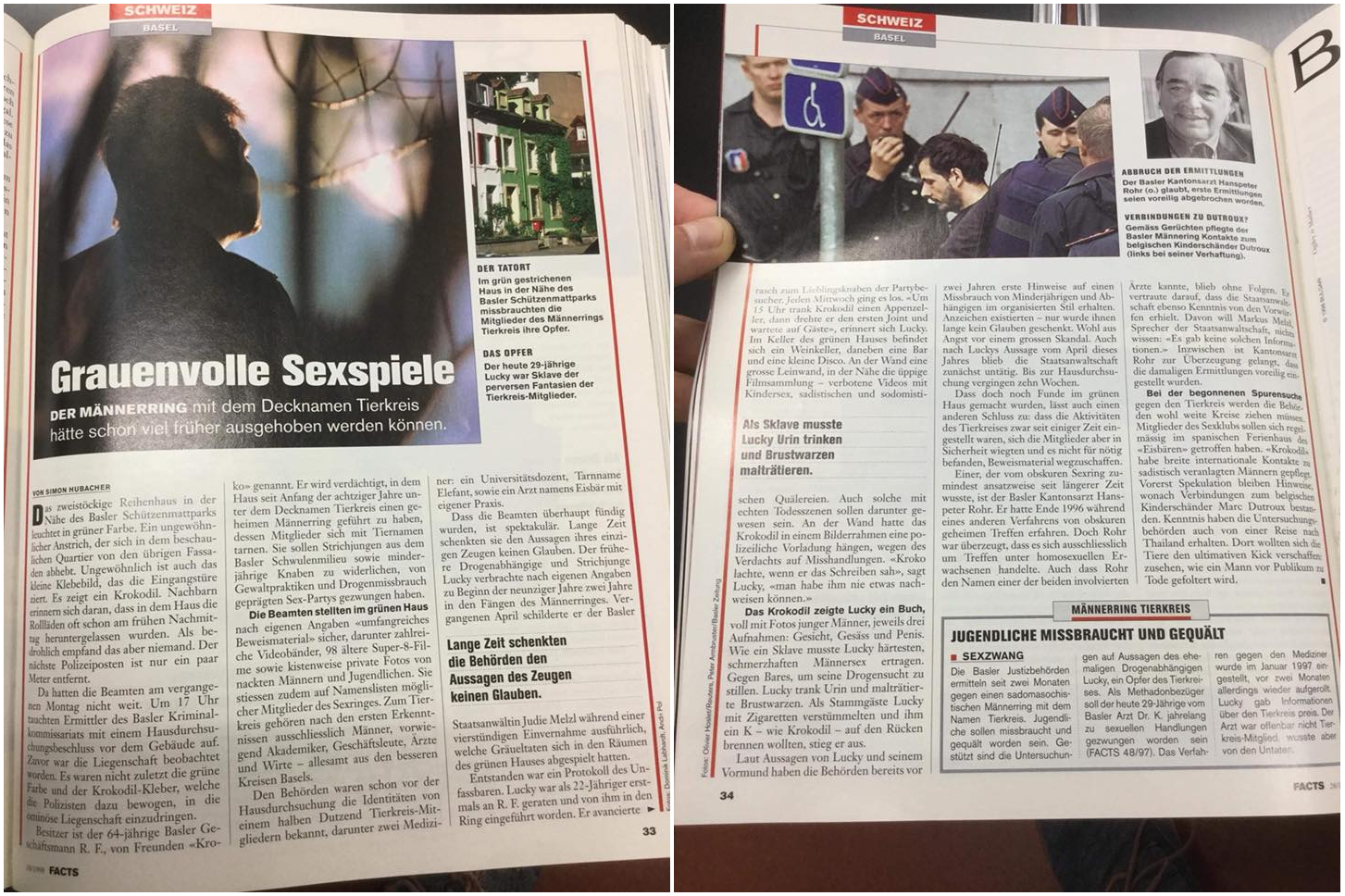 In addition to sexual harassment in general, several cases of pedocriminality have been documented in Hollywood and the music industry, so that some observers speak of a systematic problem or an “open secret”. Another phenomenon is the bizarre sex slave cult NXIVM, which was financed by two wealthy Bronfman heiresses.

Pedocriminal activities have also been documented at the UN and other aid agencies, some of which could be connected to international pedocriminal networks.

On the subject of elite pedocriminality, various forms of false information can be found on the Internet, which are spread for the purpose of clickbaiting or targeted disinformation. Some of the most well-known examples are listed below.

Portals with further information for researchers and affected persons.