Has the ‘Swedish model’ failed or succeeded?

The above chart shows that after more than a year into the pandemic, cumulative confirmed covid mortality in Sweden – without lockdown, mask mandate, and primary school closures – is significantly lower than the average in both the EU and the US. Within the US, the same applies to Florida, especially if adjusted for the mean age of the population. Indeed, a recent cross-country analysis found that neither lockdowns nor PCR testing rates had an impact on covid mortality.

The above chart alone basically invalidates the entire interventionist ‘Western approach’ to the coronavirus pandemic. For this very reason, those who have promoted this unscientific approach cannot show the big-picture mortality data. Instead, they compare Sweden only to its two neighbors, Norway and Finland, which have the lowest covid mortality among all Western non-island countries.

First, Norway and Finland implemented early border controls, despite opposition by the WHO and most Western ‘health experts’ at the time. Second, Norway and Finland have by far the lowest population-weighted density (which takes urbanization into account), whereas the population-weighted density of Sweden is similar to the Netherlands (see map below).

The fact that there are hardly any beneficial intermediate stages between the rather relaxed Swedish model and the extreme (but apparently effective) Chinese model very likely has to do with the dominant mode of transmission of Sars-CoV-2: aerosols. Aerosol transmission explains why face masks, “social distancing”, “soft lockdowns”, and most other measures failed to have an effect.

Finally, if one considers Swedish all-cause mortality from 1990 to 2021, one can see that the impact of the coronavirus pandemic was rather limited and reached about 10% of the normal annual mortality (see chart below). The median age of Swedish deaths was about 85 years, and as in many other Western countries, about 50% of deaths occurred in nursing homes. 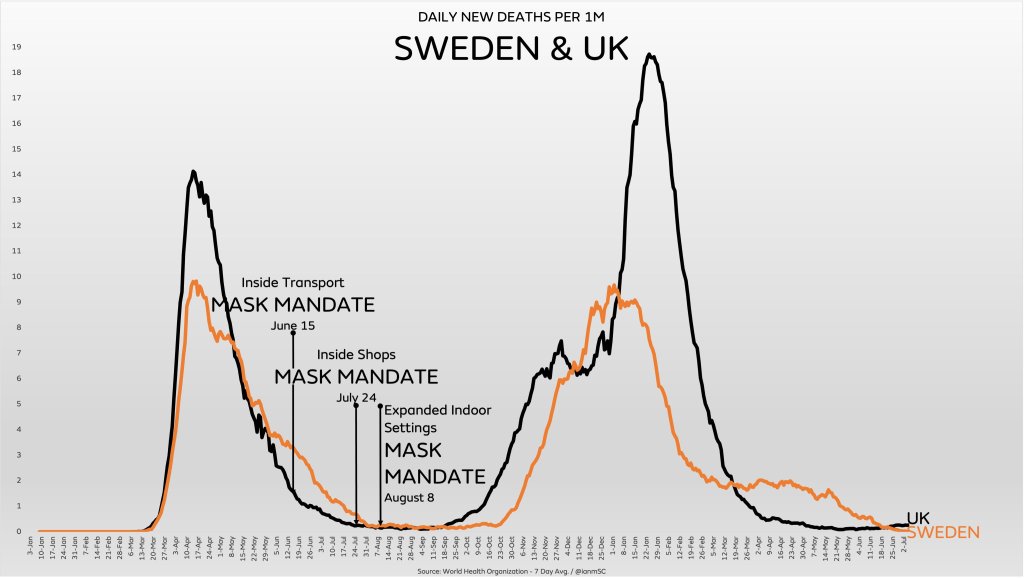 The following chart shows yearly mortality in Sweden since 1851.